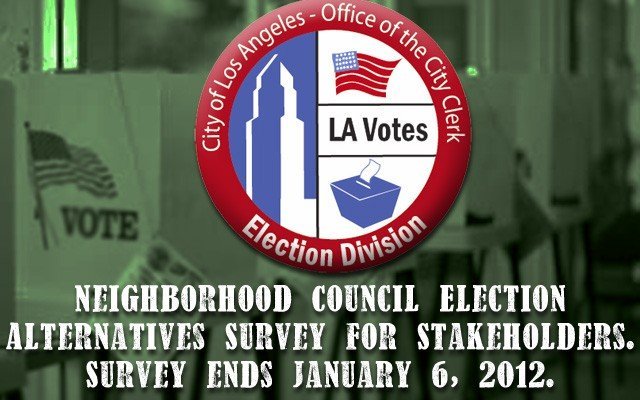 The City Clerk was not provided funds in the City’s 2011-2012 Budget to conduct the 2012 Neighborhood Council (NC) Elections, and NC Elections as administered by the City Clerk were postponed until 2014.

To accurately reflect each NC’s preference, the City Clerk has distributed an NC Election Alternatives Survey to each of the 95 NC Boards for completion. In addition, the City Clerk has extended an opportunity to any and all NC stakeholders to submit their comments by completing this individual survey which is available on the City Clerk’s website.

CLICK HERE TO FILL OUT THE SURVEY.  You will need to print it upon completion (2 pages) and mail or fax it to the City Clerk at the location given on the survey form.

If you have any questions or concerns regarding the survey, please call the City Clerk-Election Division at (213) 978-0444 or email them.

Your NC Stakeholders Survey must be completed and submitted to the City Clerk-Election Division no later than January 6, 2012 in order for your input to be considered in the final report to the Mayor and City Council.

Here is the City Clerk’s proposed timeline for collecting and processing the surveys.