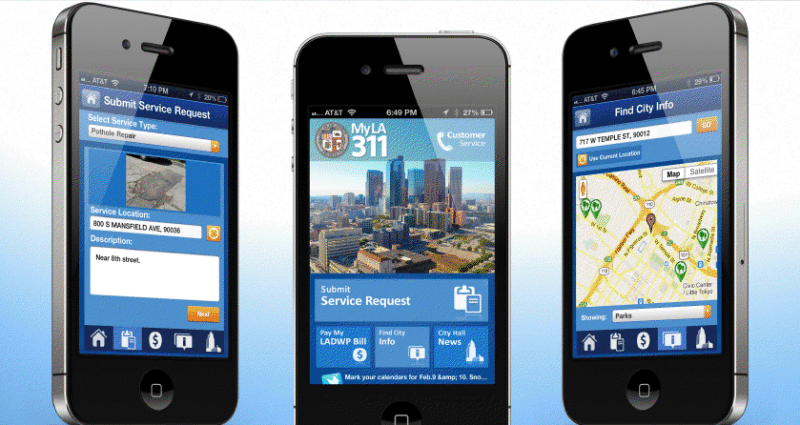 City of Los Angeles Releases a 3-1-1 App and a Cleaner Website
Posted on February 7, 2013 by LBNCadmin

Mayor Antonio Villaraigosa unveiled the My LA 311 mobile app and a redesigned website for the City of Los Angeles in a Google+ hangout with reporters Wednesday.

“Silicon Beach has raised the game,” Villaraigosa said, referring to the city’s coastal tech hub. “And the city of L.A. needed to raise ours. And we did.”

The new look for the website, which launched Wednesday, is the first refresh in 15 years. It delivers clearer portals for business owners and visitors to the city. It also brings better access to city TV channels, where people can watch live streams of city council meetings.

During the hangout, councilman Joe Buscaino said the city would be hiring a website content manager to make sure the website isn’t filled with outdated and useless information.

On the app, city residents can also pay their Department of Water and Power bill. There’s also an option to find nearby parks, libraries and police stations. By taking advantage of a smartphone’s GPS and camera, the app promises to make reporting complaints a simpler process. L.A. is one of the last big cities in the country to have a 311 app.

Though city councilman Eric Garcetti unveiled a similar 311 app for his district three years ago, a citywide app had been unavailable.

The app’s likely to increase the number of complaints the city gets. Asked whether existing city staff could handle the influx of issues, he said it could.

“I think we’ll have the capacity to do what we need to going forward,” he said.

But he acknowledged there’s room to give residents faster service. Voters next month will consider Measure A, a sales tax increase that would boost the city’s budget. Villaraigosa hasn’t said whether he will endorse Measure A, but he could do so as early as next week.

“We’ve got to get into the 21st century in terms of being more efficient in running city operations,” he said.

A spokesman for the mayor was unable to immediately say how much the city spent to redesign the website and create the two native apps, though Villaraigosa said it wasn’t very expensive. The apps were designed by 3Di.

“We’re already thinking about the 2.0 version,” Villaraigosa said. “Paying parking fines is one of those things we’re looking at it.”

He added that the next one would likely be in multiple languages as well.

In the meantime, it would be interesting if the city could work with cell phone stores in the city and cell phone service providers, such as Verizon, AT&T and Boost, to promote the app.