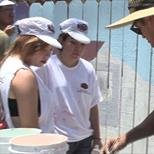 On June 27th and 28th, 2014, the second wall mural on the west side of Haskell near Haynes has been designed and executed by high school students from Birmingham Community Charter High School. The mural design contest was created by Allen Nelson and Roxan Hartstein as a way for our high school students to work to acquire the 40 hours of community service they need for graduation and to beautify our community.

Lynda Levitan, Senior Field Officer for City Councilwoman Nury Martinez, and Steve Butcher, Field Representative for State Assemblyman Adrin Nazarian, rewarded the student artists and their helpers with Certificates of Community Service. A special certificate was given to Levi Ponce, our mentor for the students. Levi is one of the most recognized mural artists in Los Angeles and we are lucky to have had him as a mentor for both of the murals.

There was a film crew at the site on the second day. Brian Tessier, a board member on the Lake Balboa Neighborhood Council, is an award winning, documentarian. Brian is producing a profile for PBS on Levi Ponce and they are including footage of our mural project. The profile will air this fall/winter.

This mural became much more of a community event this year. Our two Senior Lead Officers, Esteban “Steve” Olivares, David Ham and their partners, Denise Estrada and Joseph Frenes were there. Steve picked up the graduated, Police Explorer Cadets and brought them to the site. The cadets changed clothes and helped to paint for several hours. With the extra mouths to feed, Steve bought pizzas for everyone. We certainly appreciate all of the help our police officers gave to us on both days.

Extra help also came from the Birmingham Arts Dept. Head, Debby Epstein, who worked alongside her students for two days. Rolland Sones, an artist and friend of Roxan Hartstein, also helped and gave advice to the student artists. Two LDS (Mormon) missionaries from Utah were there, thanks to Lynda Levitan. Sister Larson and Sister Bloomfield were painting both days.

The mural created a lot of community interest. People driving by were honking and doing thumbs up. Several residents on Dempsey asked, when would the murals come to their fences. Another LB resident asked if we could have murals in other areas of Lake Balboa. That should be open for discussion. And one woman brought us two boxes of donuts. She must have seen the black and whites.

Dunn Edwards donated most of the paint and supplies for the second time and have stated they would continue their generosity in the future. We also want to thank Tesi Bravo and Kim Rudd from Dunn Edwards for working with us.

We had board members Linda Pruett, Mary Pennomon, Ruth Doxsee, Linda & Carl Schwering, and Brian Tessier present on one or both days. Two days after the mural was finished, Jack Baird, Roxan Hartstein and Allen Nelson applied two coats of anti-graffiti shielding that will keep the mural safe and clean for a very long time.