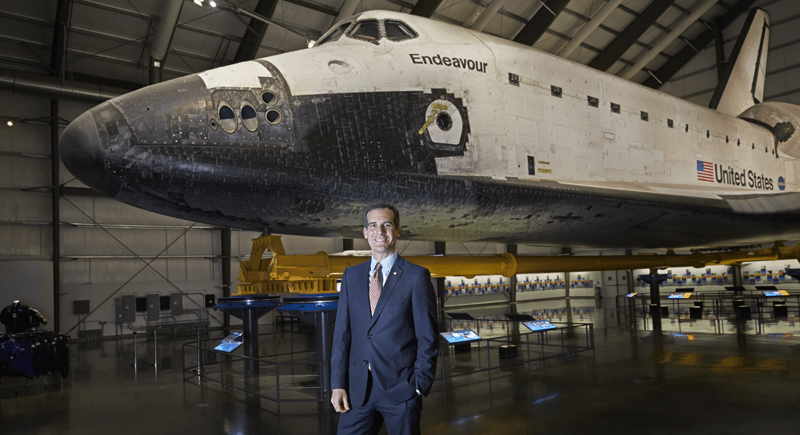 Mayor Eric Garcetti, the Los Angeles County Economic Development Corporation (LAEDC), and the U.S. Department of Commerce announced today that the first annual National Aerospace Foreign Direct Investment (FDI) Exposition will be held in Los Angeles. This is the first stand-alone FDI event in the United States co-sponsored by the Commerce Department that will focus on a single industry: aerospace manufacturing.

The Mayor and LAEDC collaborated last year to bring the exposition to Los Angeles, working jointly to find a suitable venue for the expo, and submitting the winning proposal in a competitive process against other cities and states. The selection of Los Angeles to host the first aerospace expo reflects L.A.’s dominant position in the United States’ aerospace market. More aerospace companies are located in Los Angeles County than any other county in America.

“The aerospace cluster surrounding the Los Angeles Air Force Base is the most concentrated in the U.S., and this event will help us leverage that built-in advantage to boost exports and create middle class jobs,” Mayor Garcetti said. “As a primary entry point for Foreign Direct Investment and as home to aerospace’s most innovative companies, Los Angeles is the natural choice for the Department of Commerce’s first Aerospace FDI Expo.”

The National Aerospace FDI Exposition will provide prospective investors with resources to make smart decisions about where and how to establish or expand their presence in the United States. These will include one-on-one meetings with state and local economic development organizations that are interested in attracting aerospace FDI. Other expo activities will include workshops geared specifically to aerospace manufacturers, such as contracting with the Defense Department and Federal Aviation Administration. The Aerospace States Association (ASA), a non-profit organization of state lieutenant governors and governor appointed delegates, is co-sponsoring the expo.