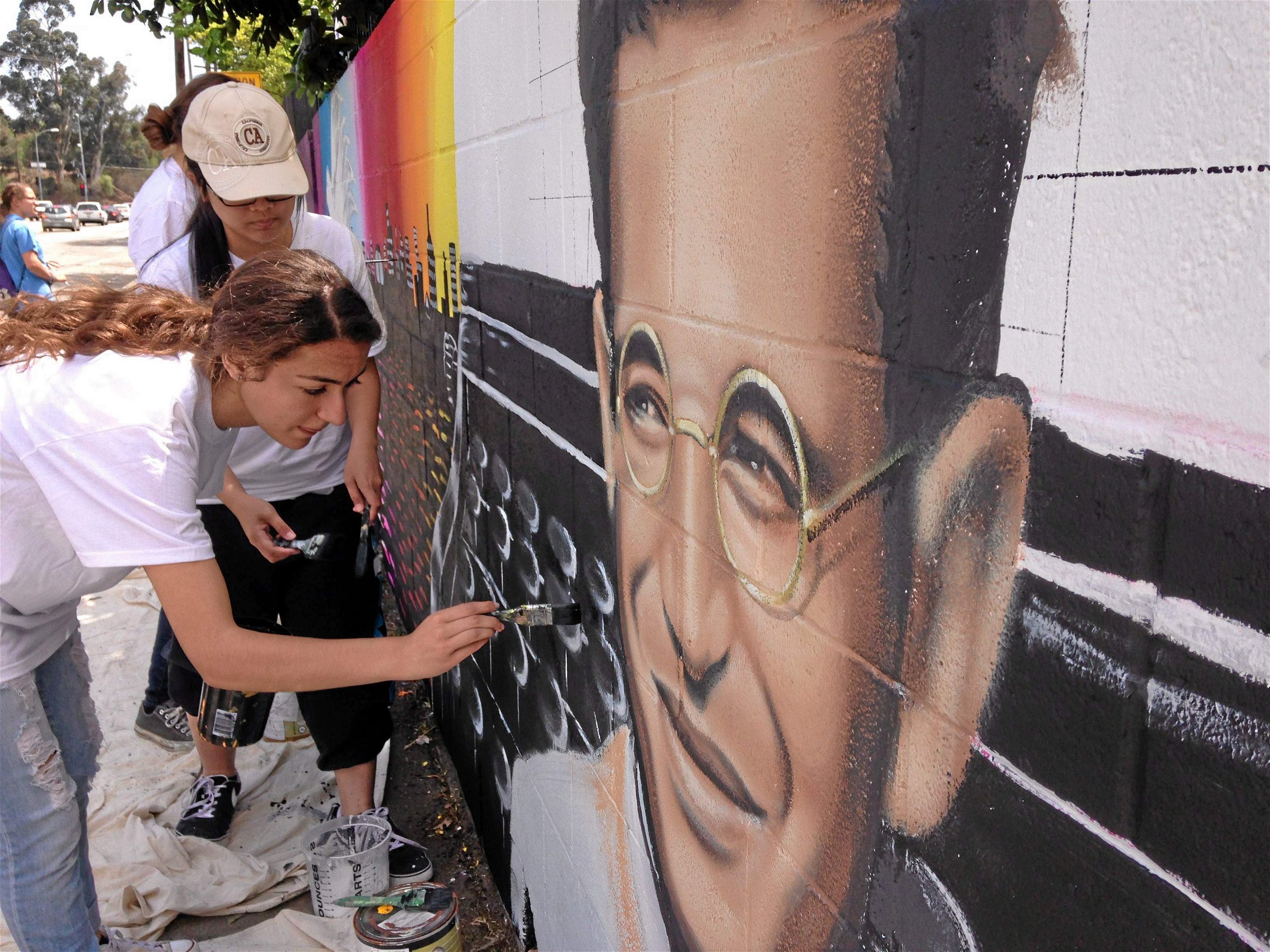 Daniel Pearl Magnet High School students Sheena Gonzalez, in back, and Jennifer Sahakian paint a mural that they helped design as a tribute to the slain Wall Street Journal reporter for whom their school is named, on Sunday on Haskell Avenue near Victory Boulevard. Photos by Brenda Gazzar

The Lake Balboa Neighborhood Council, which sponsored and organized the two-day event, selected four students from the high school who had proposed designs for the mural as part of a contest to work on the project together. The students chose to fuse each of their designs to create the 65-foot-long mural that includes an image of Pearl in front of a typewriter, several white doves, a cityscape, a quote about freedom from singer/songwriter Bob Dylan, and the journalist’s final words: “I am Jewish.”

The students received certificates of Community Service from the City Council and the State Assemblyman’s office.

San Fernando Valley muralist and digital artist Levi Ponce, who is perhaps best known for being the force behind “Mural Mile” in his native Pacoima, helped the students use geometry and the grid system to translate their design to a cinder block wall on Haskell near the Victory Boulevard onramp of the 405 Freeway.

For senior Meagan Ford, one of the four students who helped design the mural, it was “an exercise in frustration” since she had never painted a mural before. But it was also important, she said, since not even all high school journalists know the story of Pearl or that he’s “an icon of free speech and what you believe in.”

“Whenever I see and hear things about him, I’m always struck by how much courage it takes to go out on a limb to a hostile nation just because you believe so much in what you’re doing that you’re willing to die for that,” Ford said Sunday.

Pearl, who was raised in Encino and went to Birmingham High School, was killed in 2002 after he was abducted by militants in Karachi, Pakistan while retracing the steps of Richard Reid, the terrorist known as the shoe bomber. His parents, Judea and Ruth Pearl, still live in the area.

Sheena Gonzalez, a junior and a cartoonist for the school paper The Pearl Post, said she felt honored to participate in the design and painting of the mural.

“As a journalist myself, (Pearl) inspired me to speak my mind,” she said.

Jennifer Sahakian and Dianne Villata, the other two students who helped create the design, and more than a dozen LAPD West Valley cadets were also among the community members who painted the mural on Saturday and Sunday.

This is the third mural that the Lake Balboa Neighborhood Council has sponsored here on Haskell Avenue in as many years and the most significant, said Allen Nelson, the council’s communications officer and outreach chairman.

“It actually has someone’s face (on it) that most of us know as a hero,” Nelson said. “Certainly, he had tremendous courage when he went into Pakistan. It’s such an honor that his parents allowed us to have his portrait (painted) there.”