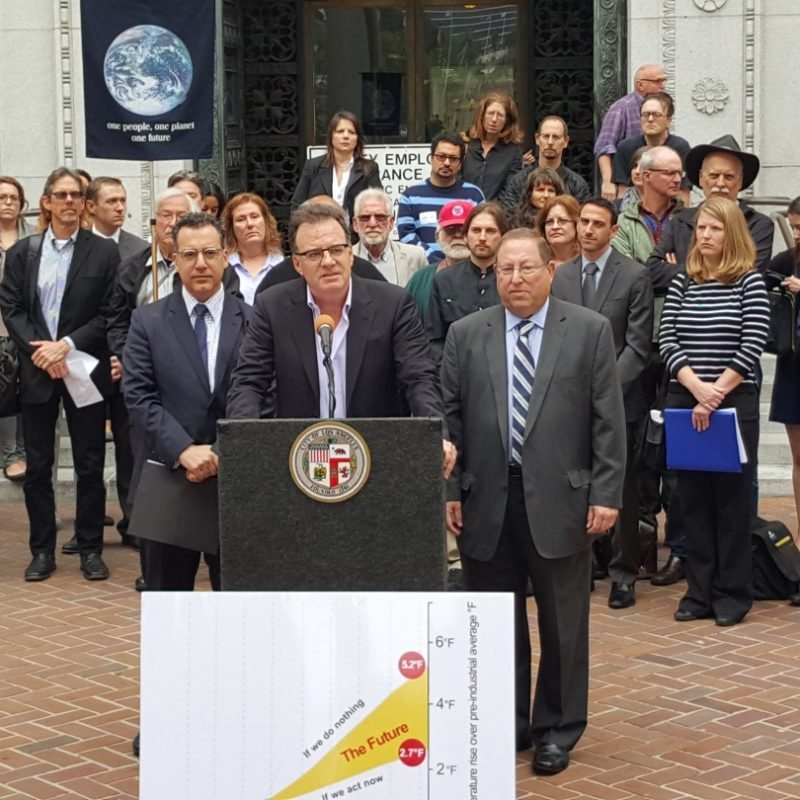 On Wednesday, May 11 (practically the eve of one of the largest planned climate change marches in Los Angeles history), the Los Angeles City Council unanimously approved a motion to establish the City’s official target of reducing its greenhouse gas emissions to 80% below 1990 levels by 2050, and directing City departments to create climate action plans to meet the interim goals — stronger than the California State goals — set by Mayor Garcetti in Executive Directive #7, his Sustainable City pLAn:

Councilmember Koretz said. “Climate change isn’t happening off in some unknown future, it is happening here, it’s happening now, it’s happening to us, to real people, in real time, and we must do absolutely everything in our power to stop it while we still can.”

The March to Break Free from Fossil Fuels, launched by 350.org, will take place on Saturday, May 14, 2016, 1pm at Los Angeles City Hall.  The stated goal of the march is to stop oil and gas drilling in LA neighborhoods and to keep fossil fuels in the ground.  Los Angeles is home to the nation’s largest urban oil field.  Speakers will include renowned climate activist, Bill McKibben, and billionaire climate activist, Tom Steyer. More information can be found at la.breakfree2016.org

In December at the Paris COP, 195 countries adopted the first-ever universal, legally-binding global climate deal to take action to keep the average global climate temperature below 1.5°C.  In February, global average temperatures broke 1.5°C of warming. On March21, the World Meteorological Organization (WMO), issued a report warning that climate change is occurring at an “alarming rate” and that world leaders must act to curb greenhouse gases now,“before we pass the point of no return.” Far more needs to be done to limit the worst impacts of climate disruption, which will disproportionately impact low-income communities and communities of color.  With the approval of this motion Los Angeles will once again demonstrate its national leadership in taking action against climate disruption.  The city is already transitioning away from carbon-burning fuels and making major investments in clean energy technology that creates jobs, builds the economy, and provides reliable, pollution-free energy.