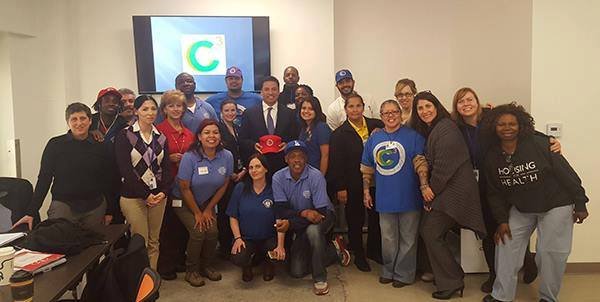 The Los Angeles City Council Homelessness and Poverty Committee (H&P) Chair Marqueece Harris-Dawson and Vice-Chair Councilmember José Huizar, announced this week the appointment of Meg Barclay as the City’s Homelessness Coordinator. The position will serve as the primary point-of-contact for homeless issues, and in coordination with the H&P Committee and the Homeless Strategy Committee, is responsible for the monitoring and oversight of the City’s implementation of the Comprehensive Homelessness Strategy (CHS).

Barclay will work out of City Administrative Officer Miguel Santana’s office as the city’s homeless coordinator.

She will oversee the city’s comprehensive homeless strategy, which was adopted along with a commitment by city leaders to dedicate more funding to fight homelessness.

Barclay’s responsibilities will include offering policy recommendations to the City Council, the Los Angeles Homeless Services Authority and the various elected officials.

She previously worked as a city legislative analyst, advising the City Council on homelessness issues.

Barclay, who begins her new job on Oct. 3, currently works in the city’s economic development department.

Barclay previously worked at HUD, where she oversaw the creation of an online portal for the department’s community development grants.

She also spent some time at Shelter Partnership, a nonprofit that advocates for funding for homeless services.