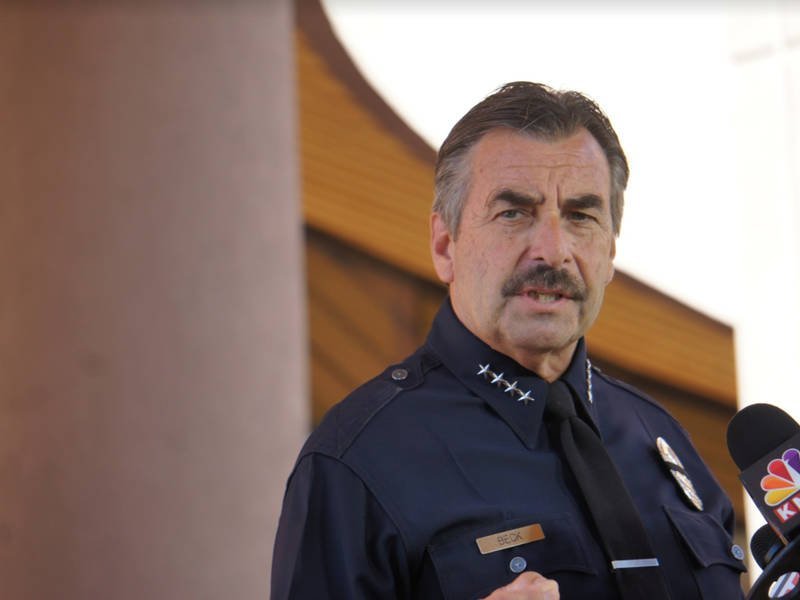 Los Angeles Police Chief Charlie Beck will retire after nearly a decade at the helm, he announced today

Beck oversaw major changes at the department during his tenure as well as some of the most dramatic moments in department history, including last year’s cadet scandal and the murderous rampage and manhunt of former officer Christopher Dorner. He ushered in the era of police body cameras and was the target of countless Black Lives Matter protests, alleging he failed to take police brutality in minority communities seriously. His supporters, on the other hand, saw him as a reformer with enough clout among the rank and file to institute real change and the wisdom garnered from the mistakes of the LA Riots to steer the department toward a community-oriented approach to policing.

Beck issued a statement on Twitter, thanking the city where spent his career.

“Serving the citizens of Los Angeles for over 40 years has been the honor of a lifetime,” Beck wrote. “Leading the men and women of the LAPD — my family — has been a privilege I never thought I’d be worth of. Today, I am announcing my retirement effective June 27th of this year.

“I plan on working every day until that day as the chief of the greatest law enforcement agency in the country,” he said. “I believe we are in the right place to support my decision, and give the next generation of LAPD leaders an opportunity to lead.

“The department is ready for fresh eyes to take our organization to even higher levels. Thank you Los Angeles for allowing me to serve your for all these years. God bless all of you, and God bless the Los Angeles Police Department.”

Beck, 64, took office in 2009 and is part of a long line of LAPD officers, the son of a cop and the father of two LA police officers. His intimate knowledge of the department earned him early support among the rank and file while his willingness to articulate the need for change made him popular with civil rights advocates at the time. Beck joined the department as a reserve officer in March 1975. He became a full-time officer in March 1977. He was promoted to sergeant in 1984, to lieutenant in 1993, to captain in 1999 and commander in 2005. He became a deputy chief in 2006, achieving the same rank his father attained at the agency.

“I know the ghosts and the glory of this police department’s past,” he said when he was sworn in as chief, according to the Los Angeles Times. “There were failures, [times when] we did not rise up to our ability, we did not do what we should have done in some instances. Those are the ghosts. But the glory of the department is reflected in my father’s leadership, his ability to work with people and his ability to understand community policing before it was a popular concept.”

The unexpected retirement announcement follows a scandal-plagued year for the department, and comes on the same day an Officer Robert Cain, who Beck personally handcuffed for allegedly having sex with a teenage police cadet, was sentenced to jail. The cadet sex scandal was discovered last year when officers chased cadets in a stolen police car through the city, ending with a dramatic crash. The department later found out the high school cadets had been stealing police cars for weeks and impersonating officers in illegal traffic stops.

Beck explained why the dramatic step of arresting his own officer in June.

“I think it’s important to send a message,” he said at the time. “Everything I do is calculated to impact either the city of Los Angeles or Los Angeles Police Department. I find the actions of Cain, if they are proven, to be despicable. I find them to be absolutely inconsistent with the ethics and standards of the Los Angeles Police Department, and they are criminal. And I’m a police officer, and I was — I felt it was my duty to make the arrest.”

The announcement also comes the same day a veteran police captain sued the city, alleging she suffered retribution for accusing the department of doctoring crime statistics to downplay violent crime in the city. In November, Beck said the allegations are “not only lies, they’re damn lies.”

Activist Melina Abdullah was among those joining a chorus of Beck opponents taking to social media to hail his pending departure.

“Thank you to our partners who stood with us to make this happen,” she wrote as she reposted a Black Lives Matter Twitter message cheering the announcement.

Weekly Los Angeles Police Commission meetings have often been forced to adjourn or go into recess over the past two years as activists shouted from the audience, typically directing their anger at the chief.

But Beck has held the support of Garcetti and most of the Police Commission, the civilian panel that oversees the LAPD.

“Under his leadership he has helped to make the LAPD the preeminent law enforcement agency in the world,” commission member Steve Soboroff said. “His focus on community policing has resulted in creating, maintaining and expanding the great relationships the department has with the diverse communities of Los Angeles. The many successes in programs that have been implemented under his leadership will serve as a testimony to his skill as a leader.”