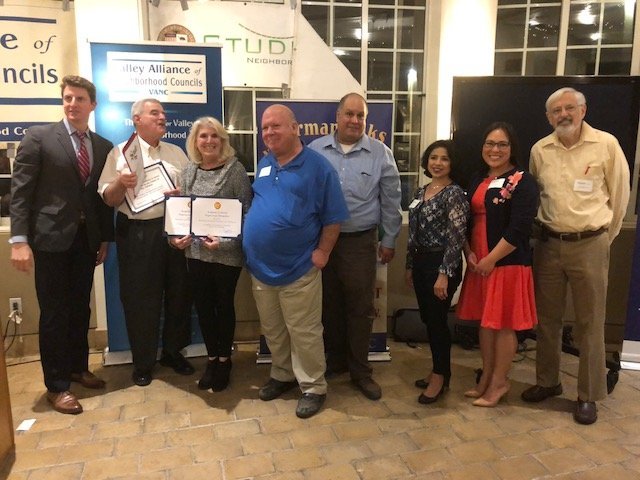 LBNC Education and Recreation & Parks Committees Win VANC’s “Best of Working Collaboratively to Invest in Education for the Future of Our Children” Award
Posted on March 12, 2018 by LBNCadmin
“Best of…Working Collaboratively to invest in education for the future of our children” – Lake Balboa Neighborhood Council – Education and Recreation & Parks CommitteesWhen Lake Balboa Neighborhood Council board members were told that their stakeholders were going to move so they could send their children to “good” public schools, Lake Balboa NC created an Education Committee and tasked itself to find out if these poor ratings were an accurate reflection of the education provided at local schools.  Committee members met with LAUSD Superintendent Michelle King,  District Superintendent Vivian Ekchian, and LAUSD Board Member Scott Schmerelson, attended LAUSD School Site Council Meetings and Coffee with the Principal meetings. The Committee  learned that TWO, Lake Balboa schools (Bassett Elementary and Mulholland Middle School Robotics Magnet) won VEX STATE Championships in March 2017 and were advanced to the VEX WORLD Championship tournament in Kentucky.

To build upon the momentum for encouraging students to participate in activities that increase skills related to Science, Technology, Engineering and Mathematics (STEM), the Council voted to grant Bassett Street and Lemay Street Elementary schools, twelve additionalrobot kits each, along with field perimeters and additional game elements to expand their robotics programs.

To increase community involvement and help promote the schools, the Council invited the schools to attend their “Movie in the Park” at Louise Park. The championship teams showcased their award-winning robots and spoke about their schools’ unique programs. Lake Balboa stakeholders were immediately drawn to the robots and were interested in learning more about the schools and their robotics programs.

Robotics stood out as a clear way to capture the attention of the budding elementary students in a fun and exciting way while continuing to build upon their STEM skills. The Council voted additional funds for Robot kits for Gault Street Elementary school.

In addition, the Council purchased 20 chess sets for each school to build upon logic and reasoning skills for students who didn’t make the robotics team, or were too young to be on the team. The schools have started their afterschool chess clubs.  Assembly member Adrin Nazarian started playing chess when he was 4 years-old and attributes his strategic thinking and planning to chess. He promotes a yearly high school chess tournament in Lake Balboa and has agreed to include Lake Balboa’s elementary schools students on May 12th. this year.

Lake Balboa voted funds for the Rec. and Parks committee to purchase and install four permanent chess tables at Lake Balboa for all to enjoy. The tables will be installed this spring.