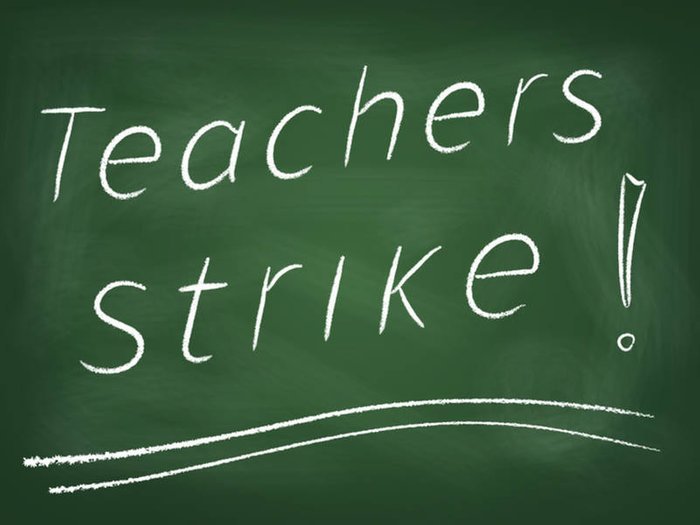 We are now on day 5 of the LAUSD Teachers Strike.

Less than 24 hours before the possible strike of 33,000 LA teachers, the union announced plans to hold off for a few more days.

Thursday was the original strike date publicly set by the union weeks ago, but the Los Angeles Unified School District has challenged that date in court, contending it was not given official 10-day notice, as state law requires. Although the legal challenge is still playing out in Los Angeles Superior Court, UTLA leaders announced the new strike deadline at a news conference outside district headquarters just before entering into another round of bargaining with LAUSD leaders.

“While we believe that we would eventually win in court against all of (Superintendent) Austin Beutner’s anti-union, high-priced attempts to stop our legal right to strike, in order for clarity, and to allow members and our communities to plan, UTLA is moving the strike date to Jan. 14,” UTLA Vice President Gloria Marinez said.

Should more than 30,000 teachers, nurses, librarians and counselors strike, it would be the district’s first walkout in 30 years, impacting 600,000 students.

LAUSD officials have tried a number of legal maneuvers to delay the strike, but the district’s efforts to date have been unavailing. On Tuesday, no hearing took place after Los Angeles Superior Court Judge Samantha Jessner denied a motion by UTLA for an exemption to the electronic filing rules that would have allowed a hearing to occur.

Before the delayed strike date, the union’s goal in court gas been preempt the district from going to court on the same issue after a strike begins; if that occurred, a judge could shut down the strike for several days, dampening its momentum.

No court rulings are expected to be made Wednesday, and both sides are scheduled to be back in court at 9:30 a.m. Thursday.

The LAUSD case scheduled to be heard Thursday before Judge Mary H. Strobel seeks a delay of a matter of weeks based on grounds that UTLA did not comply with a requirement that its members not encourage a strike for a 10-day period after the Jan. 3 announcement of the walkout.

UTLA’s case, which maintains the union indeed gave the LAUSD a legally required 10-day notice that its members would stop working under the existing contract, is currently before another judge. The union attorneys will try Wednesday afternoon to get their case before Strobel to be heard Thursday morning as well.

The LAUSD Board of Education passed a motion Tuesday that eases background check requirements for some parent volunteers in anticipation of the need for help in the event of a strike. Those volunteers will not need to pass a full federal background check but will still be checked against a national database of sex offenders. The less-restrictive policy would kick in only if the superintendent declared an emergency. A volunteer would then simply fill out a form and the district would check a database to make sure the person was not a registered sex offender.

The board Tuesday also passed a resolution that directs Beutner to create a three-year “enterprise plan” aimed at bringing in more money. The resolution states that the district faces a structural budget deficit that requires the district to cut costs and generate additional revenue, and sets a March 18 deadline for creating a plan that could include parcel tax and school bond measures, as well as strategies for increasing enrollment.

“We recognize that Los Angeles Unified needs more resources, and this resolution confirms our commitment to work with families, labor partners, and the communities we serve to achieve this,” Beutner said.

No one issue separates the two sides. They have been negotiating for nearly two years without coming close to a resolution. They’ve already gone through mediation and a fact-finding session in recent months. The fact finder’s report was issued last month, and it sparked more verbal sparring between the two sides.

The LAUSD said it brought forward a new proposal Monday that would have added nearly 1,000 additional teachers, counselors, nurses and librarians, which the UTLA rejected. UTLA President Alex-Caputo Pearl told reporters he had several problems with the proposal and was surprised the district had “so little to offer.” He said, “Unless something changes significantly there will be a strike in the city of L.A.”

Caputo-Pearl said the district’s latest proposal was inadequate for several reasons, including that a potential raise for teachers would be contingent on cutting future health care benefits, that it actually increases class size instead of lowering it, and would not add enough long-term nurses, counselors, and librarians.

With about 900 schools in the district, Caputo-Pearl said the offer would only amount to about one additional employee per school. He added that it was not clear if the 1,000 positions agreed to by the district would be new hires or the result of the district shuffling around employees.

For its part, the district has insisted that its contract offer to the union incorporates many of the recommendations set forth in a previous fact- finding report, such as a 6 percent pay raise, a $30 million investment in hiring of professional staff, reducing class sizes and elimination of a section of the labor agreement that the union claims would allow the district to unilaterally increase class size.

UTLA officials have said many elements of the district’s offer remained “unclear,” suggesting that the 6 percent salary increase being offered still appears to be contingent on cuts to future union members’ health care and contending the offer also appears to maintain the contract section allowing increases in class size.

The union is also continuing to push for increased district investment in hiring of counselors, nurses, librarians and other professional staff, saying the $30 million proposed by the district would have a negligible impact on only a small percentage of LAUSD campuses.

The union has been pushing the district to tap into an estimated $1.8 billion reserve fund to hire more staff and reduce class sizes. LAUSD says the staffing increases being demanded by the union would cost an estimated $786 million a year, further depleting a district already facing a $500 million deficit.

Beutner told reporters the district simply did not have enough money to address all of UTLA’s demands.

“There’s no more than that, so the notion that we are hoarding reserves, the notion that more money exists somewhere else to give more to reduce class sizes at this time, is not accurate,” Beutner said. “We are spending more than we have in service of our students.”

Despite the absence of a consensus between the district and its teachers, L.A. Mayor Eric Garcetti, who has no formal role in education issues, was relatively upbeat about Monday’s talks. He was involved in separate phone conferences with both sides, the Los Angeles Times reported.

“Yesterday was really a very positive sign that they’re at the table,” he said Tuesday. “An agreement won’t get finalized in the street or in a press release but in face-to-face conversations.”

He added: “There’s not a lot that separates them. People want lower class sizes. People want fair pay. People also want to make sure that there’s support in our schools.”

But could this be a long strike?

“It could be,” the mayor said. “It really depends on the leadership, both sides, the union and of the administration. Without betraying any of the confidential negotiations, I think real progress was made yesterday (Monday). Still many steps to go, but after a long time with them never really talking to each other for months, I think that conversation has finally started.”

One thought on “LA Teachers Strike”