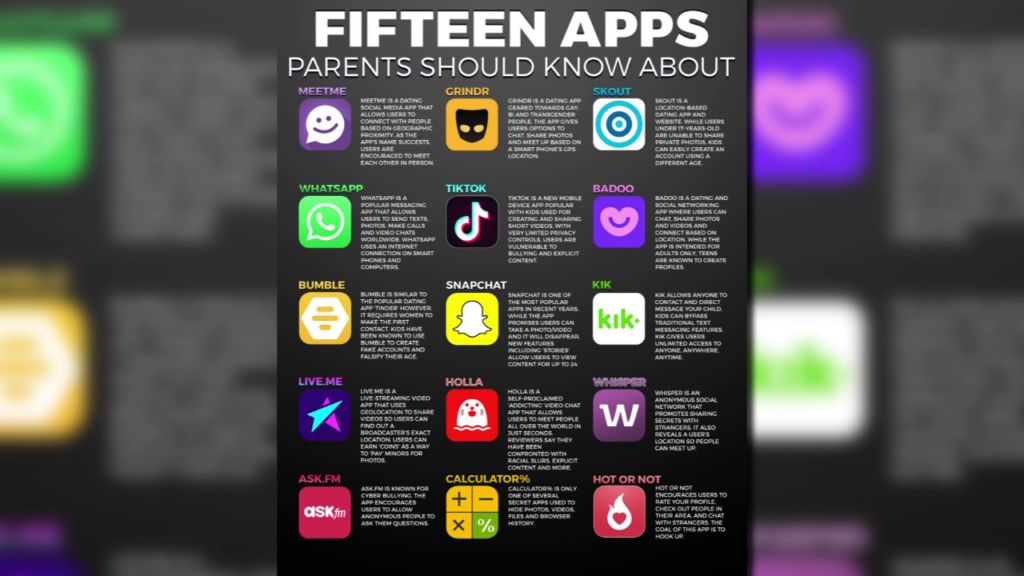 With several reports of arrests made after online predator and human trafficking stings, law enforcement officers around the country are reminding parents about potentially dangerous apps their kids could have access to. Most of the apps involve talking to people or sharing videos and pictures. It’s a concept that officials say puts kids at risk and in a vulnerable position.

According to law enforcement, apps parents should know about:

MEETME: a dating social media pp that connects people based on location. Users are encouraged to meet in person.

BUMBLE: similar to Tinder, but requires women to make the first contact. Law enforcement says kids and teens can create fake accounts and falsity their age.

LIVE.ME: a live-streaming app that uses geolocation to share videos. Users can earn”coins” to “pay” minors for photos.

ASK.FM: this app lets users ask anonymous questions and is known for cyberbullying.

GRINDR: a dating app that connects people to chat, share photos and meetup based on a smart phone’s GPS location.

SNAPCHAT: one of the most popular social media apps in the world, Snapchat lets users take and share photos and videos. The app also lets people see your location.

CALCULATOR+: police say this is one of several apps that are used to hide photos, videos, files, and browser history.

SKOUT: a location-based dating app that is supposed to prohibit people under 17 from sharing private photos. However, police say kids can easily create an account with a different age.

BADOO: a dating and social media app where users can chat and share photos and videos based on location. Police say the app is supposed to be for adults only, but they’ve seen teens create accounts.

HOT OR NOT: the app lets users rate profiles, check out people in their area and chat with strangers. Police say the goal of the app is to hook up.

Officials say there’s an easy way to make sure your kids stay safe. “The biggest thing parents can do is, #1, talk to their children. Talk to kids about these apps and the dangers of what happens if you share too much information. Parents should be easily able to access their child’s phone and accounts. #2, parents can periodically check their child’s phone. Look at their phone. See what kind of apps are on their phone. Experts say this creates a boundary while also opening the door for communication. “Just because you’re looking at your child’s app doesn’t mean that you’re going through all their comments, their likes, their photos. But if you had a concern, you have the ability to do that.

Parents are advised to do the research in order to stay on top of trending social media apps. Overall, officials say the easiest things to do as a parent is to stay educated, talk to your kids and monitor the apps they use.