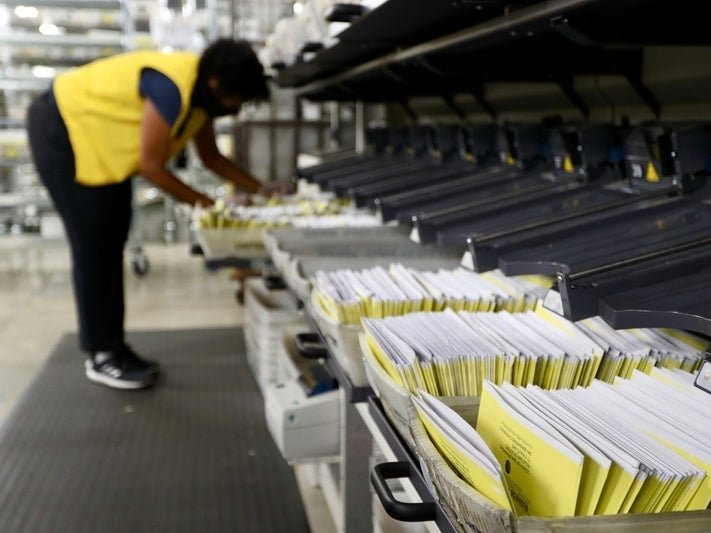 The latest numbers from last week’s election show Schmerelson with roughly 54% of the vote, leading Koziatek by 18,000 votes. Vote-counting is continuing, but it was unclear how many ballots remain to tallied in the race. The latest results as of Monday morning are posted below:

“While the results of this election means I did not win, I am overwhelmingly grateful for my supporters and all of their hard work over the past year,” Koziatek wrote in a concession message. “I would also like to thank my family for their unwavering support throughout this journey. My sons got to watch me take a bold leap to run for elected office. This courageous journey will be something they will always remember and that makes me proud.”

She congratulated Schmerelson, a five-year board incumbent who worked as a teacher and principal in LA schools for over four decades, and wished him “the best in his new term” representing District 3, which covers the western San Fernando Valley.

Koziatek, a 39-year-old special projects and events manager at Granada Hills Charter Public High School was heavily backed by the California Charter Schools Association, which spent more than $6 million in an effort to unseat Schmerelson, who was backed by the powerful yet less-financially mighty United Teachers Los Angeles union. LAist reports that Schmerelson was outspent 6-1.

The campaign took on a nasty tone as anti-Semitic and untrue mailers about Schmerelson were sent out. In February, a mailer included what some described as anti-Semitic imagery of Schmerelson, who is Jewish, wearing a gold dollar-sign chain and holding a cigar and a fistful of cash. Others falsely claimed that Schmerelson voted to triple his salary, and improperly earned a pension and a board salary. He does receive both, but this is not unusual or against the rules, according to a report in the Los Angeles Times.

The other candidate UTLA backed in last Tuesday’s school board election, Patricia Castellanos, was defeated by Tanya Ortiz Franklin in the District 7 race. That seat, left vacant by Richard Vladovic being termed out of office, represents an area that includes South Los Angeles, Gardena, Watts and San Pedro.

The teachers union wanted both Schmerelson and Castellanos to win to ensure a pro-teachers union, anti-charter school majority on the board.

Koziatek said that while she won’t be serving on the board, she said she would continue to push for transparency on the board and to ensure “every student’s needs have been accounted for during the COVID-19 pandemic.”

Incumbent board members Jackie Goldberg and George McKenna were both reelected in the March primary in Districts 5 and 1, respectively.

The new board will have to deal with a raft of politically sensitive issues, such as managing the continuing learning challenges presented by the coronavirus pandemic and an increasingly intense push to “defund” the School Police Department. Schmerelson is on the record as being against cutting the LASPD, though Koziatek declined to commit to a firm stance one way or the other.