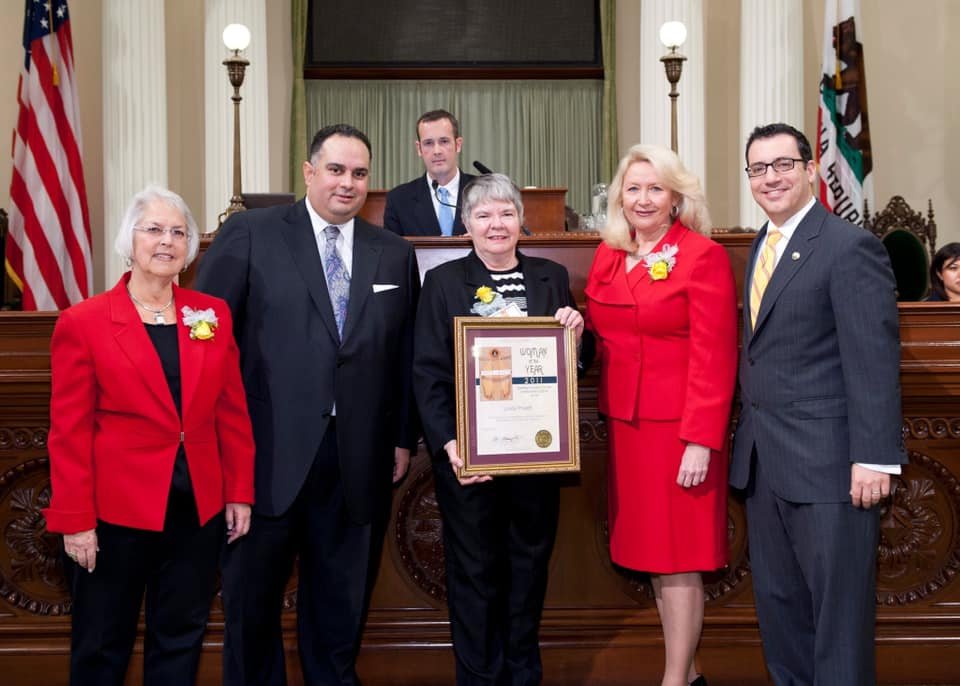 A Tribute to Linda Pruett, Founding Member of the Lake Balboa Neighborhood Council
Posted on June 21, 2021June 23, 2021 by LBNCadmin

On Sunday, June 13, 2021, after a couple months in hospitals and rehabs, Linda succumbed to an infection her body could not fight off.  She had many accomplishments to her credit, which are listed below. However, they were possible because she knew relationships and connections were how to reach people, as evidenced by these quotes: “There are a few humans that have had such an incredible impact in our community of Lake Balboa in all of Emergency Preparedness and of course CERT (Community Emergency Response Team).  She was such a wonderful, incredible person whom I loved so very much and that I was lucky enough to have had as my dear friend and mentor,“ and “She was a great person and friend. She always had a smile for you, you always looked forward to seeing her, you always waited and listened to her input on a given project. On the Land Use committee, she may not always agree with the project, but she always made the presenter feel that they had earned her respect. When she walked into a room, the room lit up, she made everyone feel good about themselves and why they were in the room, to begin with.”

By 2007 Linda was the Emergency Preparedness guru and became the chair of our EP committee. Her motion to spend the equivalent of a full years’ annual budget of $50,000 on two containers filled with search and rescue equipment, triage, and medical supplies to be used by stakeholders in time of a disaster was met with resistance from the City.  But with Linda’s perseverance, she marshaled support, fought City Hall, and won!  In the following years her agenda of being prepared for “The Big One” was copied citywide.  “Can’t do” was not in her vocabulary.  Linda continued on the Board as a Senior Stakeholder Representative until her passing.

In 2007, she co-founded the Southern California Preparedness Foundation, a non-profit organization of which she was the Corporate Secretary and Director, whose mission is to promote and support disaster awareness, education, and preparedness via community events, such as the Valley Disaster Preparedness Fair, public forums, focused programs such as Map Your Neighborhood and targeted outreach. Trained as a CERT (Community Emergency Response Team) 3 responder, she vigorously supported that training for others and was responsible for graduating the largest CERT class in Los Angeles. On March 21, 2011, Assemblymember Bob Blumenfield honored Linda’s tireless dedication to emergency preparedness during the California State Assembly’s Woman of the Year ceremony at the California State Capitol in Sacramento.

She was the Founder of Text Management Services, Inc., the first full-service word processing Service Bureau on the west coast, and served as its President and CEO for nearly thirty years.

Developing into a publishing company, TMS, Inc. produced technical manuals for the aircraft and aerospace industry throughout the world. Linda also served as Preparedness Adviser on the West Valley Community Police Advisory Board (CPAB), and as Co-President of the San Fernando Valley Chapter of NOW, the National Organization for Women.

We will greatly miss you, Linda P. Thank you for dedicating 18 years to the community of West Van Nuys / Lake Balboa. We will continue your work to get everyone ready for THE BIG ONE!