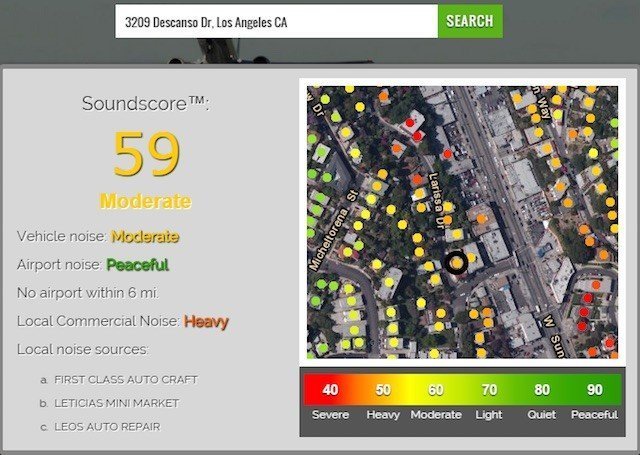 While we have data maps that cover just about everything in Los Angeles—from the age of each building to the average cost of one-bedroom apartments by neighborhood—what we are lacking is a sound map.

Applied mathematician and former Caltech researcher Brendan Farrell, along with his small team, are helming this massive project, dubbed HowLoud, to build what he’s calling the first sound map of North America (yes, Canada gets a nod, too). They’ve already created sound maps for Los Angeles and Orange County, and launched a Kickstarter today to fund covering the rest of North America.

We can already start using HowLoud for free. All you have to do is enter a Los Angeles or Orange County address on the HowLoud website. If it scores anything below 40, that’s considered a low score and it means that your neighborhood is really loud. If you score over 90, that’s a stellar grade, just like in school, meaning that your neighborhood is quiet. It also lists the culprits or locations behind the noise in your area.

HowLoud doesn’t use microphones to record the sound. Instead, they measure the sound by building a 3D map of the buildings and the roads. They take into consideration the time of day, speed of cars (and the volume that can be heard from that particular speed), and the noise level caused by things like planes, 24-hour markets, bars, restaurants and gas stations. Then they “use physics to propagate that sound through a neighborhood as it gets blocked and reflected by buildings,” according to their Kickstarter page.

The money they get from their crowdfunding campaign would go towards more specific details in their sound maps, like helicopter routes (which is kind of a big deal in Los Angeles), differentiating between heavy trucks and regular cars, and determining which bars and stadiums are the loudest and when they’re the biggest noise offenders.

Farrell noticed the need for a sound map last year when he was searching for a new apartment. He wanted to live in a quiet place. “I discovered that every other type of information imaginable is immediately available except information on noise,” he wrote on his Kickstarter page. “And so the idea was born.”

He told LA Weekly that his plan is to get apartment and real estate listings sites to purchase his service for their customers to peruse through the sound levels when choosing a place to live. People can also order more detailed reports.

“You’re looking for a new apartment, a new house or a place to stay on Airbnb, and you want to know how loud it is,” Farrell told LA Weekly. “Go to Howload, type in the address and bingo, you have a sound score.”

Let’s hope they can also add noisy neighbors and pets to the sound map because that’s also relevant to our interests.