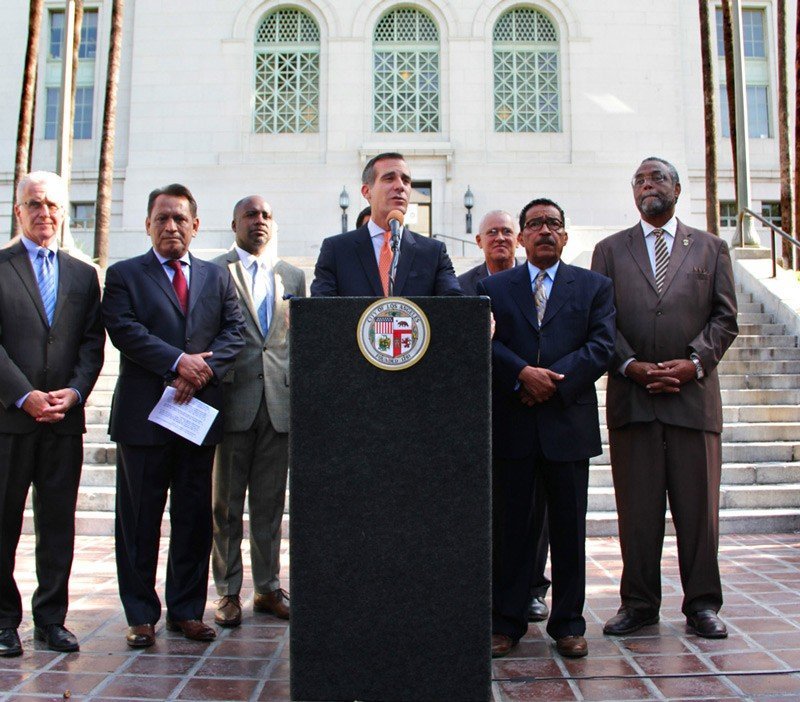 Mayor calls for investments in long-term initiatives, and rolls out short-term proposals to address emergency needs.

Mayor Eric Garcetti today announced the first steps of a comprehensive strategy to address the homelessness crisis in Los Angeles, an effort that would invest at least $100 million annually in City funding to help house tens of thousands of homeless individuals.

To address immediate needs, Mayor Garcetti also announced a critical short-term strategy to secure an additional $13 million in emergency funding to expand homeless services and housing. The bulk of that funding, $10 million, will be allocated to veterans and non-chronically homeless people in the form of housing subsidies — to rapidly re-house individuals who need short-term assistance to get off the street and on with their lives. Mayor Garcetti called for shelters to remain open 24 hours a day during the rainy season, and for winter shelter availability to expand by two months. The Mayor also proposed seed money to incentivize new storage and access centers across the city — that would newly provide access to restrooms, showers, laundry, and services, as well as providing safe storage for personal possessions.

This comes as Los Angeles City Council leaders this morning declared homelessness in Los Angeles a “state of emergency” and introduced a motion to allocate $100 million in one-time funding for homeless services.

“We all understand the urgency that this situation requires, and what is at stake,” said Mayor Garcetti. “I applaud the Los Angeles City Council for their action today in earmarking a necessary initial investment that helps launch my comprehensive plan to tackle homelessness. If we can lift up those in need, and pick up those left behind, then we can live up to the best of our ideals.”

The City Council’s action is a critical down payment on the Mayor’s comprehensive homelessness plan, which is being developed jointly by City, County, Home for Good and other partners.

In addition to one-time funding, the Mayor is calling for an annual $100 million investment that would fund permanent housing for the homeless and establish an institutional foundation to tackle homelessness for years to come.

The plan relies on three pillars, which set both short and long-term goals:

Connecting homeless Angelenos—and those most at risk of becoming homeless—with good jobs can help end the cycle of homelessness. Mayor Garcetti also launched today the Los Angeles Regional Initiative for Social Enterprise (LA:RISE), an initiative focused on fostering workforce development solutions for individuals who face the greatest barriers to employment – those with a history of homelessness or incarceration, and disconnected youth.

Funded by a $6 million investment by the U.S. Department of Labor, the five-year initiative will be led by the City of Los Angeles Workforce Investment Board and City of L.A.’s Economic and Workforce Development Department, with support from the employment social enterprise organization REDF. Social enterprises are mission-driven businesses that earn and reinvest their revenue to provide people who are the hardest to employ with jobs so that they participate in the economy and their communities.

The initiative will feature transitional and bridge jobs, as well as training and support services for individuals in need. LA:RISE is a unique model, designed to better align and integrate existing services and foster cross-sector collaboration between social enterprises, and government, private and nonprofit sectors.

“REDF is proud to partner with the city of Los Angeles and commends their commitment to growing the social enterprise space, a proven approach to supporting those facing the greatest barriers to work,” said Carla Javits, REDF president & CEO. “These investments reinforce an American ideal that is central to our collective identity and a sense of dignity, hope and belonging – that every person should have an equal opportunity to achieve success and prosperity through hard work, determination and initiative.”