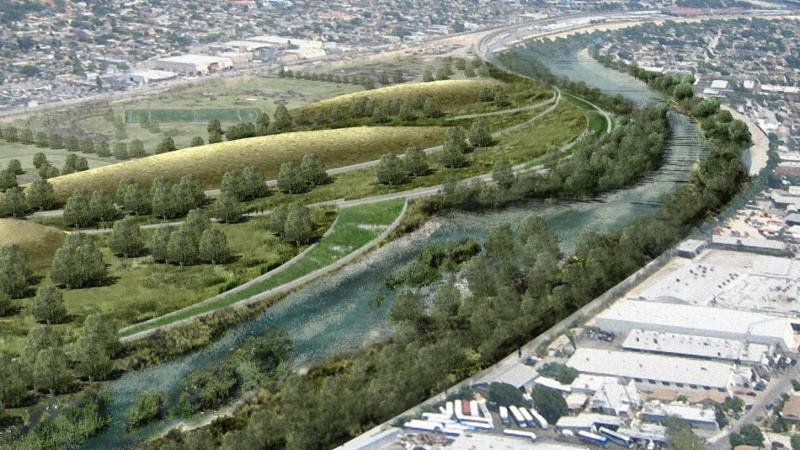 City to Acquire ‘Crown Jewel’ of LA River
Posted on January 27, 2017 by LBNCadmin

The Los Angeles City Council just approved the purchase of 42 acres of property at the center of plans to revitalize the Los Angeles River. Known as the G2 parcel, the property is the final remnant of the 250-acre Taylor Yard owned by Union Pacific Railroad.

Taylor Yard is on the east bank of the LA River, north of Downtown in the Cypress Park neighborhood. The surrounding parcels at Taylor Yard have already been developed into Rio de Los Angeles State Park, the Sonia Sotomayor Learning Academies and the Taylor Yard Transit Village. The G2 parcel will connect Rio de Los Angeles State Park with the Bowtie parcel, another State Park site — opening up more than one mile of direct riverfront access. Led by Mayor Garcetti, LA secured $25 million in state funding toward the city’s purchase and development of the G2 parcel. With today’s Council vote, the City will move forward to allocate nearly $60 million.

The G2 parcel is prioritized in both the City’s Los Angeles River Revitalization Master Plan and the U.S. Army Corps of Engineers’ Los Angeles River Ecosystem Restoration project, which was approved by the U.S. Congress in 2016. Because of its size and location along a soft-bottom stretch of the river, G2 can help restore habitat, while also providing expansive new public views into Downtown and to the iconic Griffith Observatory and Hollywood Sign landmarks.

“Today’s action is an important piece of the greater puzzle that will eventually result in a fully renewed and revitalized LA River winding through our city,” said Councilmember and Budget and Finance Committee Chair Krekorian. “This parcel will give Angelenos acres of additional green space in the basin and complement the great work we’re doing to improve river access in the San Fernando Valley.”