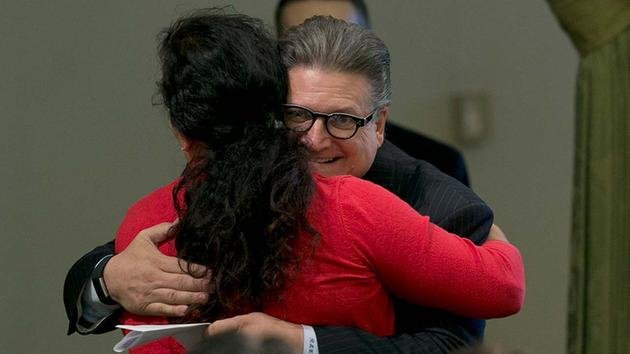 Former Assemblywoman Linda Halderman alleged that he gave her an unwanted embrace in 2010 that she considered to be assault.

Sen. Bob Hertzberg, D-Van Nuys, was reprimanded by the state Senate for hugging fellow legislators and staffers, according to documents released Thursday, and he said that while there was no illicit intent behind his actions, he will respect the reprimand.

“Even so, I understand that I cannot control how a hug is received, and that not everyone has the ability to speak up about the unwelcome behavior,” Hertzberg said. “It is my responsibility to be mindful of this, and to respect the Rules Committee’s request to not initiate hugs.”

An investigation into Hertzberg’s behavior began in December when a former Assemblywoman, Linda Halderman, alleged that he gave her an unwanted embrace in 2010 that she considered an assault. That led two other legislators to express concern about Hertzberg’s penchant for hugging.

Hertzberg noted the investigation found that “the claim brought forward in December was not supported.” He also sent a letter to his Senate colleagues, explaining that hugging “has been my way of greening friends and colleagues” his whole life, and he considers them “a gesture of warmth and kindness and a reflection of my exuberance.”