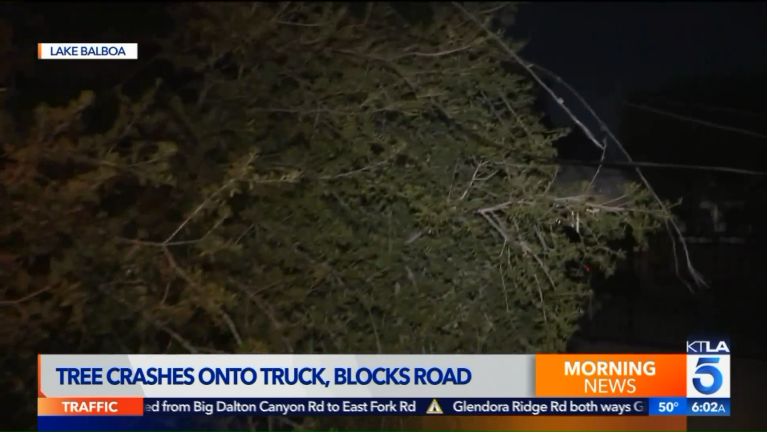 Another storm is headed to Southern California Tuesday, prompting evacuation orders and concerns about flooding, mudslides, and falling trees.

Evacuation orders were in effect for areas in Santa Barbara County and Ventura County.

In Montecito, sheriff’s deputies were going door to door, letting residents know they needed to leave.

Signs and traffic cones blocked off roads, and front doors and mailboxes were marked with orange flags, indicating the evacuation.

The rain is expected to move into the area Tuesday afternoon and continue through Wednesday.

Residents in Ventura and Santa Barbara counties told KTLA how they are preparing for the rain.

“We make sure that with our property that we have sandbags and we have flashlight because power does go out,” Ventura resident Arlene Horowitz said.

Residents in Lake Balboa believe a combination of rain and a recently broken water pipe may be responsible for a large tree to falling in the 700 block of Encino Avenue.

Video taken Tuesday showed the tree still resting on top of a white pickup truck that it smashed on its way down.

Encino Avenue will remain closed near Lemay Street Elementary until crews can clean up the mess.

More trees are likely to topple around the Southland as another powerful storm moves into the area.

The National Weather Service has issued a flash flood watch for the burn areas of Los Angeles, Ventura and Santa Barbara counties.

The watch will begin at 6 p.m. and remains in place until 11 a.m. Wednesday. Forecasters are concerned about possible mudslides and debris flows during those hours of heavy rain.

Residents in some burn areas of Santa Barbara County are being told to prepare to leave.

Evacuation orders are set to begin at 4 p.m. for parts of the Thomas, Whittier and Sherpa fire burn areas, the county’s emergency website stated.

An evacuation center will be open at the Goleta Valley Community Center, located at 5679 Hollister Avenue in Goleta.

For more information on road closures in Ventura County, visit VCPublicWorks or DOT.ca.gov.