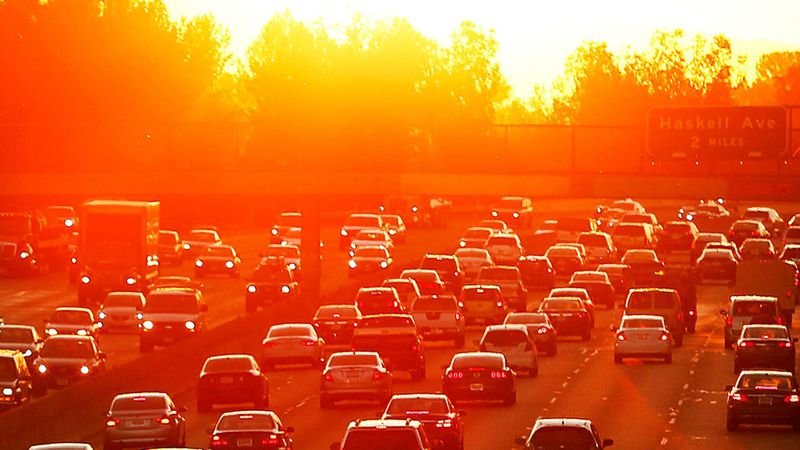 A ridge of high pressure will continue to keep temperatures above normal Monday, but relief is in sight.

A weekend heat wave is expected to continue to scorch the Los Angeles region with above average temperatures Monday.

Sunday saw record heat in parts of the city and triple digit temperatures in the valleys. A ridge of high pressure is to blame, and it will remain in the Los Angeles area Monday. Expect above-normal temperatures to most areas, especially the valleys. However, the hot weather won’t challenge records as they did Sunday, forecasters said.

It was a strange kind of heatwave. An offshore flow blowing warm air from the deserts to the ocean helped the high pressure “squash” the marine layer that normally keeps temperatures down in June, Kittell said. But a shallow marine layer remained along the coastal plane and inland, so while Burbank temperatures hit 100 degrees the high in downtown Los Angeles was 82, he said.

The Sunday temperature in Burbank surprisingly hit 100 degrees, which tied a 1979 record for June 9 and a 101 in Woodland Hills and 102 in Van Nuys failed to break records, National Weather Service Meteorologist Ryan Kittell said.

Expect more of the same on Monday with valley temperatures in the mid-90s to 100 but highs downtown and other inland areas in low to mid 80s and mid-70s along beaches, Kittell said.

He did not expect records to be broken Monday because they are higher for this date.

The marine layer will thicken and temperatures are forecast to decline Thursday and Friday with valleys in the 80s, inland areas in the 70s and beaches in the upper 60s to 70s, Kittell said.

“This is June Gloom season,” he said.